3 Myths About the 5 Stages of Grief You’ll Want to Know. 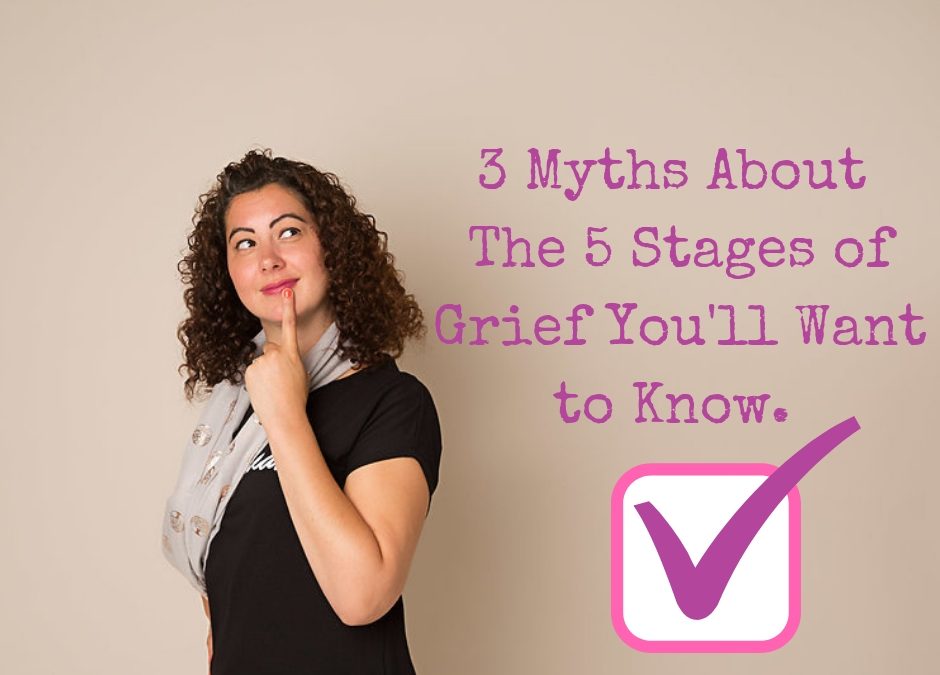 The 5 Stages of Grief model, devised by Elisabeth Kubler-Ross, gets a bit of a bad rep and I want to bust a few myths around this.

Kubler-Ross was a Swiss-American psychiatrist who was inspired by her work with terminally ill patients. In 1969, she wrote her first book called ‘Death and the Dying’ and was strongly motivated by the lack of teaching in medical schools on the subject of death and dying.

Her work involved into a series of seminars, patient interviews and research which all became the foundation of her book. So although Kubler-Ross is commonly known for developing the ‘5 Stages of Grief’, there were other (much earlier) theorists who had also used similar models. 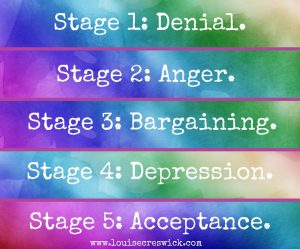 Kubler-Ross didn’t intend her model to explain what people go through when they lose a loved one. Instead, she developed them to describe the process patients go through as they come to terms with their terminal illnesses. The stages were only later applied to grieving friends and family members, who seemingly showed a similar process.

Kubler-Ross herself said that grief doesn’t occur in a linear and predictable fashion. Writing toward the end of her career, she regretted that her stages had been “misunderstood”. In her final book, Kubler-Ross says, “They were never meant to tuck messy emotions into neat packages. They are responses to loss that many people have, but there is not a typical response to loss, as there is no typical loss.”

The stages are tools to help us frame and identify what we may be feeling as a result of various losses in our lives. They are not stops on a linear timeline and not everyone goes through all of them. “Kubler-Ross originally saw these stages as reflecting how people cope with illness and dying,” observed grief researcher Kenneth J. Doka, “not as reflections of how people grieve.”

Myth #3 – The Meaning of the Final Stage: Acceptance.

Central to Kubler-Ross’s stages is the notion that grief is a process which eventually leads to acceptance – her last stage. Acceptance is one of those things which is very much open to interpretation. I’ve even heard it said from clients, they shall “never accept” the loss but rather learn how to live with it.

David Kessler, who co-authored two books with Kubler-Ross, says this about acceptance:

“Acceptance is often confused with the notion of being “all right” or “OK” with what has happened. This is not the case. Most people don’t ever feel OK or all right about the loss of a loved one. This stage is about accepting the reality that our loved one is physically gone and recognising that this new reality is the permanent reality. We will never like this reality or make it OK, but eventually we accept it”.

How does it apply then?

For me, the Kubler-Ross model remains a great guideline for grief. It helps to make sense of what we’re experiencing, relatable and can be of comfort. But there is no right or wrong way to work through your grief and it is normal that your personal experience may vary as you work through the grieving process. Grief symptoms present themselves physically, socially and spiritually. Loss is a fact of life, and so are the reactions that follow, but the grief that accompanies significant loss is frequently misunderstood.

I believe the 5 Stages of Grief are not to be followed, but simply to check-in with. The stages reflect where we’re at in any given moment. What makes the work of Kubler-Ross so popular (and stand the test of time) is that she identified something that naturally occurs in our behaviour after loss.