Pain is Inevitable. Suffering is Optional. 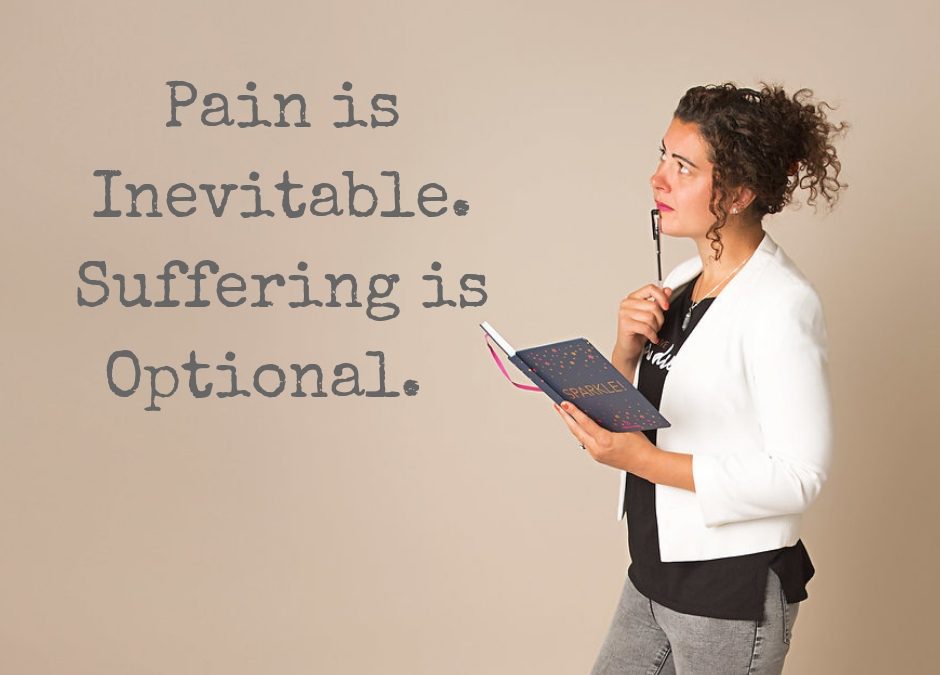 “Pain in life is inevitable, suffering is optional.”

When I posted this on social media, I realised just how emotive a statement this can be. To me, it’s always made perfect sense and speaks to me of resilience, responsibility and personal choice during times of grief and loss.

The inspiration behind this was one Viktor Frankl. In his words:

“Between stimulus and response there is space. In that space is our power to choose our response. In our response lies our growth and freedom”.

In ‘Man’s Search for Meaning’, Dr. Frankl wrote about the psychological impact he had experienced during his time as a prisoner of war in a Nazi concentration camp (during World War II obvs).

His entire family were killed during this time and he describes his experience vividly. He was robbed of everything – including his dignity and basic human rights. And yet, he was able to make a conscious decision that the Nazi’s would never take away his ability to choose his response.

So by focusing his attention on that which he could control (the bit between the stimulus and the response), he was autonomous even in the midst of the most horrific acts that were happening around him and to him.

For me, this is a shining example of amazing inner strength and the power of choice. This is where I make my own distinction – in the context of grief and loss – between pain and suffering. Cue my geeky side…

It’s widely know that pain can be felt on an emotional and physical level. It’s driven by the physiology of our central nervous system – remember the bit at school about signals being transmitted through the body? When we experience pain, the body is simply doing its job.

It is us however, who gives meaning to pain through internal self-talk and beliefs, which in turn drives an emotional response.
Suffering on the other hand, is a direct result of our mental response to pain. Say you’re running a marathon, which is probably going to hurt. Then you think “OMG, this really hurts”. The pain is the reality of running a marathon isn’t it? But, whether or not you can run anymore is down to you.

I believe that grief is designed to aid recovery from the pain of loss (even though it doesn’t feel like this during the early stages). When we’re on a grief journey, we often confuse our recovery from pain with the suffering it causes. Let’s face it, as humans we don’t like anything that makes us feel uncomfortable. We are then motivated to do whatever we can to relieve that suffering. For example, have you ever caught yourself thinking “why me?”, “this is horrendous”, “it’s not fair”, “I hate this”? These are amongst some of the most common thoughts of my clients when they are suffering.

Suffering throws everything (and I mean everything) out of balance. We become emotionally, psychologically, spiritually and physically out of whack. Healing is about bringing ourselves back into alignment.

To add the cherry on the cake, our thoughts have the potential to make us feel even more miserable and so this cycle becomes a self-fulfilling prophecy. You see, when we magnify the suffering by focusing on it, this amplifies the pain signals – and around we go. And I don’t need to list all of the emotions that develop and dominate our lives because of this pattern we become stuck in. The longer this cycle continues, the more out of whack we become.

I’m not saying to reduce suffering is easy – but it is simple. It’s absolutely possible to modify our suffering when we are consciously aware of the chain reaction associated with pain. This is exactly what Dr. Frankl did. When we intercept the vicious cycle of suffering and pain, we are able to start re-balancing things and counteracting the distracting thoughts that lead to more suffering. By adjusting our thinking – and our thinking about that thinking – we can alter our emotional responses and the extent to which we suffer, as well as our experience pain.

In essence, the suffering we cause ourselves in our minds far exceeds that of the actual pain. I’m not perfect – this is something I still work on as often as I can. I have become acutely aware that the suffering I create in my mind is taking away the precious moments I have while I’m alive.

Working with Pain and Suffering.

Coaching will really help you to alleviate the suffering you’ve created for yourself and separate it from the actual pain. But I guess I would say that because I have experienced this for myself.

I simply want you to know that this is possible and if you want to exercise your power of choice then I’m here to help.